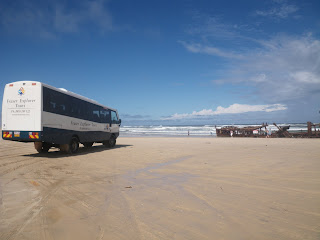 The Best Job In The World's George Karellas and Magali Heuberger experience Fraser Island the Cool Dingo Way. Queenslandholidays.com blog posted June 2010.
We bounced out of Kingfisher Bay Resort in the morning, as fresh as daisies, and caught a shuttle bus for breakfast at the Cool Dingo Bar just over the hill. This was going to be our first day on a group tour and it was exciting. The tour was run by Cool Dingo Tours and with 26 other travellers in the group we knew it would be a sure fire way to meet travellers from across the planet. Once we'd finished breakfast we made our way to a small car park across the road where a bus that could've come straight from the Paris-Dakar rally awaited.

For the AdventurerOnce across the island, we headed north along 75-Mile Beach and our first stop was the shipwreck Maheno. The Maheno, a luxury passenger liner that also served as a hospital ship, was built with three propellers, a first in 1904. When sold for scrap metal in 1935 the props were stripped off to fund the Maheno's final journey. As she was being towed towards Japan the convoy ran into a cyclone and the tow lines were severed. The rest is history. I should have been a sailor. I could standing front of the Maheno for hours daydreaming of bygone days when it was manned by gutsy masters who sailed by the stars and their wits, real men as broad as they were tall... Ok, enough of that, you'll get a great photo here.

Further along the beach Eli Creek is one of the many fresh water springs that emerge from the island and wind their way to the sea. You can stroll inland along a boardwalk that comes to an end where a small stair drops you into the water. As you wade back towards the beach in the cool water, small fish dart away from your feet and you feel like an explorer.

Back on the bus we were hijacked by the fly boys from Air Fraser. The beach isn't just a highway it's a runway too! The flight they offer is ridiculously cheap, but even if it wasn't I'd say do it. Taking off from the sand is exhilarating and the views of the aquatic life in the ocean and of the inland lakes will stay with you forever. You'll see later how the views from Fraser get better the higher you go.

For the Nature Lover
Something that really got my hair standing on end was getting up close and personal with a Dingo. They slink towards you with a bold look about them but don't be fooled by their cute dog like ways, this is a wild animal; keep your distance even if the Dingo has other ideas. No feeding the wildlife!

A highlight of the tour was the short trek up Indian Head to spot aquatic life from on high. We didn't see a lot in the end but that's the luck of the draw and the view of the island in either direction is more than worth the walk.

For the Beach BumOur favourite part of the beach tour was Champagne Pools. It's the only place on Fraser that you can swim in the Pacific. Volcanic rocks jut out into the ocean towards the north of the island and forms two large natural pools that fill with salt water and fish, as waves break up and over their eastern flanks. We took a swim and then basked in the sun on the rocks before Damian, our driver, called us to lunch.

For the FoodieOk so call us snobby, but we were surprised at the quality of the food offered by Cool Dingo Tours. Meals and snacks are provided during the day and there's a box of fruit and snack bars at the front of the bus that you can dig into whenever you like.

Damian even ventured off to pick us some bush tucker berries he had spotted on the way to Champagne Pools while we tucked into our fresh Caesar Salad and tortilla wraps.

That night, back at the Cool Dingo Bar, it was Asian night. There was a choice of three or four mains as well as a salads and desserts counter. "You must be hungry," said one of my fellow travellers as I arrived at the table with a mountain of beef stir fry stacked on my plate. It was a small plate so the food only looked big. I promised myself I'd be good when I got back to the real world.

Sleeping Arrangements
Cool Dingos' wilderness lodges reminded me of the Aussie-designed dorms in my old school back in Ireland. Airy buildings, again on stilts (it keeps the building cool don't you know), each with four or five rooms and the choice of double bed sharing or dorm style bunks. It's backpacker orientated but this is some pretty special wilderness backpacker bedding.