FRASER ISLAND: Wind is most definitely not a fisherman's friend and the large swell has made it a bit difficult to get the lines to stay out over the last few days. Schools of mullet have been spotted north around Waddy Point, which means the tailor aren't too far away - as the boys from RBAC found out recently.

Not to be deterred, a quick trip over smooth tracks to the sheltered western side has meant that reputations stay intact and that fish can still be served up for dinner. For those that love their flathead, there have been some beauties caught (and spotted) around Ungowa.

A big thanks too to Andreas Peuler who wrote in (via Facebook) to tell us he'd cleared some fallen trees from the track in to Ungowa late last month. There'll be some pretty happy fisherfolk on Fraser at the moment because of your good deed.


The good news is the sun is shining and conditions are looking better for the back half of the week as we await the NW wind turn- around that'll see tailor on the bite. There's also been plenty of folks heading across from Dilli to Birrabeen on the southern lakes circuit drive, which is in great condition.

You'll find Zoe R working in the Front Office at Eurong Beach Resort. We don't mind telling you that, when it comes to fishing, she gives visiting fisherfolk a run for their money.

On 25 April, Australians woke to the news that almost 9,000 Nepalese had been killed and tens of thousands more injured in a earthquake measuring 7.3 on the Richter Scale -  the worst natural disaster to strike Nepal since the Nepal–Bihar earthquake in 1934.  Hundreds of thousands of people were made homeless with entire villages flattened.

The devastating news touched the hearts of people on the Fraser Coast who have a special connection to Nepal through the Forget Me Not Children's Charity, started by local Lars Olsen.

The news broadcasts also made quite an impact on Fraser Island and resort staff decided to raffle an iPad to help raise vital funds for the Nepal Earthquake Rescue Fund.  Staff even gave up their 'Dingo Dollars' (resort cash) to buy canned goods and non-perishables to send over. 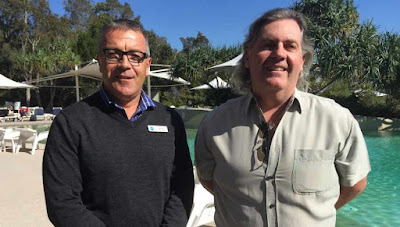 Tickets in the relief raffle were sold in all areas of our business including Eurong Beach Resort, Brisbane Office, Hervey Bay based departments, Fraser Island Barges, Kingfisher Bay Resort and Fraser Explorer Tours.

According to Group General Manager, David Hay, who championed the cause - the support from all the team was overwhelming and the group matched staff's fundraising dollar for dollar.

"We are very proud to have been able to help the people of Nepal in this small way, who have been devastated by this disaster," Mr Hay said.  "Our Human Resources Manager, Natalie Griffiths, deserves a special mention as she sold over seven hundred tickets, which was an outstanding effort."

Kingfisher Bay and our staff on Fraser Island have had a long association with Lars and the F-M-N home. Over the years we've hosted balls and fundraisers and past staffers have sat on the board and visited Nepal. We've also donated prizes to help boost fundraising and our David Hay's wife, Michelle, is a current board member.

A cheque was presented to the Vice President of Forget Me Not Australia, Peter McKay (pictured above right), in a modest ceremony on Fraser Island today.